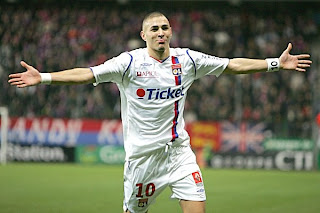 Position : Striker
One of the hottest young prospects in the game, Benzema, despite his tender age, has already received world-wide praise for his performances in the French Ligue 1 and for France on the international stage.

1. Of Algerian descent, Benzema has been likened to Zinedine Zidane

2. Took over the number 10 shirt from the retired Zinedine Zidane

3. Before joining Lyon, he trained at local Rhône-Alpes club Bron Terraillon SC in the commune Bron, a suburb of Lyon

4. A "pure product" of the Olympique Lyonnais youth system, having been born in Lyon, he came through the youth ranks and began his career at the top level at the age of 16

5. Benzema made his league debut for Lyon on January 15, 2005 in a match against Metz

6. Before representing France, Benzema was eligible for Algeria and was called up to the squad by the Fédération Algérienne de Football in December 2006, but turned them down stating, "Algeria is my parents’ country and it is in my heart, but football-wise I will only play for the French national team"